Design of digital practice [in sports] 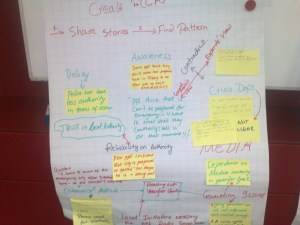 The focus for this half-day Design Camp was to introduce a Human-Centered Design (HCD) perspective and research approach to the Phd-students. The HCD-toolkit from IDEO was used in order to target the design challenge of “improved information technology for Citizens crisis preparedness and response“. The goal of the design camp was to shed a bit more light on the often promising concept of involving and provide participation for citizens from a crisis preparedness and response perspective. But the the big question is really, how could such participation be manifested in terms of processes and technologies. How do everyday people view Crisis Preparedness and Response? Go talk and listen to them is perhaps a good starting point.

Three design teams conducted a FIELD EXPEDITION and made interviews and observation in downtown Tilburg. The stories and observations from the field work was later that same day used in an IDEA PLAYGROUND where they analyzed their material and transformed those insights into rough design ideas. This extreme form running a design process resulted in a range of very interested concepts and solutions that was presented to representatives from the city of Tilburg. The feedback from the representatives indicates that the concepts and solutions was highly appreciated.
Running a half-day design process is not the most suitable way of conducting high quality research, but it shows that much can be done when time and budgets are restricted.

We are looking forward to organize similar design camps in the future in order to quickly come up with a large set of ideas that later on in large projects could be explored in more detail and rigorously.

This site uses Akismet to reduce spam. Learn how your comment data is processed.